This site will work and look better in a browser that supports web standards (such as Netscape Navigator 6.x, Mozilla 1.x, Internet Explorer 6.x, Safari 0.0, or higher versions or any of those products, or another browser of the same age, but it is accessible to any browser or Internet device.) You are seeing this message since you are using an older browser. (Until 2003, there was the option of providing you an automated update link. However, that project expired after 3 years. Please contact the webmaster if you receive this message.) 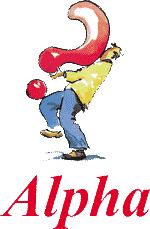 The Ottawa Alpha Conference happened on October 26-27, 2001. Pictures from the conference are here.

The Toronto Alpha Conference happened on May 1 & 2, 2001. Information from the conference is here.

Maximizing the Potential of your Alpha Course happened on September 7, 2002. Pictures from this event are here.

There's nothing wrong with Christianity. It just hasn't been tried that much in the last 2000 years...

Design and website by taxtim.ca Hosted by National Capital Freenet Counter started June 5, 1999 (Escati Free Counter) You are Visitor No: